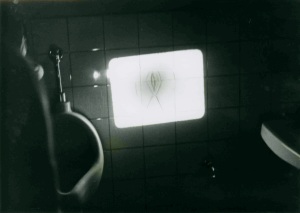 For Sugar Daddies Hans Scheugl has filmed graffiti from the wall in a toilet at the Vienna University. The material was ment to be shown on toilett-walls only. The kind of place where the anonymous messages of intimate and private character was  recorded serves therefor also as the place of their public presentation.

On the occasion of two screenings Scheugl filmed the event and subsequently worked the new material into the film – a concept that theoretically could be continued further on. The title Sugar Daddies refers to the film with the same title with Stan Laurel and Oliver Hardy from 1927.