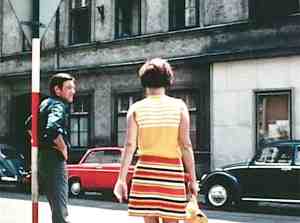 Digital restoration by the Austrian Filmmuseum in 2014.

In Hernals documentary and pseudo-documentary procedures were filmed simultaneously from two camera angles. The material was then divided into phases of movement and intercut together. The sound was doubled in the same way. Two realities, differently perceived according to the conditions of the film, were edited into one synthetic reality where everything is repeated. This doubling up destroys the postulate: identity of copy and image. Loss of identity, loss of reality (e.g. schizophrenia). Imagine a theater piece where the actors recite each sentence twice, make each gesture twice, play each scene twice – and one conceives perhaps the monstrosity of our reality that cannot be repeated.
Time is not stopped, but streched – time as fissure between reproduction and product, time which creates space.